We do not take reservations except for our gondola cabin seating. All indoor seating is available on a walk-up basis only, and we may not be able to accommodate all members of your large group at the same time.

It was circa 1990 in the mountain town of Steamboat Springs that co-founder Rich Tucciarone first tapped into his brewing career. What began as a happenstance meeting with a fellow ski bum forged into a friendship and eventual job opportunity at a fledgling Denver brewery. Before venturing away from Steamboat, Rich met his wife and partner in the business, Wendy. Rich’s brewing journey launched them from the mountains to the urban Big City of Denver for five years with Breckenridge Brewery, then to the tropical islands of Hawaii for another dozen years with Kona Brewing Company, untapping incredible experience and experiences, developing hundreds of friendships within the craft brewing industry and cracking open a few good beers along the way. True to the Yampa Valley Curse*, their voyage finally delivered them full-circle back to Steamboat in 2011.

The wait for the perfect location for Mountain Tap Brewery was long but well worth it. The former home of Yampa Valley Electric Association, Mountain Tap Brewery’s facility sits just across the 9th Street Bridge from Howelsen Hill, within a stone’s skip of the Yampa River and smack in the middle of Yampa Street, fast growing into Steamboat’s exhilarating Restaurant Row. Construction began on February 1, 2016, and after a fast and furious four-month buildout the first brew – Picking Hops IPA – was concocted on June 17. The brewpub opened its doors on July 7, 2016.

In Steamboat Springs, residents and visitors alike live and breathe the mountains, be it skiing, snowboarding, snowshoeing, snowmobiling or snowman building… be it biking, hiking, climbing, camping, paddling or fishing. At the end of the day, they belly up to the bar to see what’s fresh and innovative from the Mountain Tap.

*In 1881 Ute Indian leader Colorow put a curse on the Yampa Valley: “Those who come to the Yampa Valley to live will never be able to leave. If they do succeed in leaving the valley, they’ll be forced to return.” 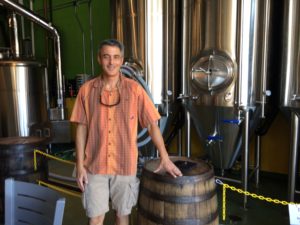 Rich Tucciarone brings to Mountain Tap more than two decades of craft brewery experience ranging from small brewpubs to very large regional production breweries. He holds a B.S degree in Food Science from Cornell University, with an emphasis on fermentation and product development. He began his brewing career with five years at Breckenridge Brewery of Denver, working his way up to Head Brewer and overseeing brewery operations and assisting with numerous expansions. Next, he spent 12 years as VP of Brewery Operations for Kona Brewing Company on the Big Island of Hawaii, leading brewing teams at four production brewery locations including Hawaii and both East and West coasts of the U.S. Here, he produced award-winning beers that were distributed nationwide. Kona’s annual production rose from 1,800 barrels in 1999 to more than 140,000 barrels under his leadership.

After returning to Steamboat in 2011 he spent four years as a brewery consultant, assisting startup and expanding craft breweries in the U.S. and abroad. He also served as a malt representative for Rocky Mountain region breweries and distilleries for Briess Malting, the nation’s oldest malt house. Rich attended Siebel Institute of Brewing Technology, has been a Master Brewers Association of the Americas member since 1993 and a recognized beer judge at the World Beer Cup and Great American Beer Festival since 2000. He serves on the advisory board of Colorado State University’s Fermentation Science and Technology undergraduate program.